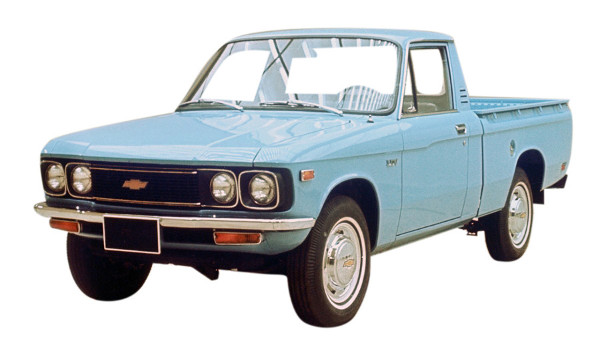 In the late 1960's, almost no one saw the popularity of the small truck coming. Detroit’s Big Three - Ford, Chrysler, and GM - were blindsided by the popularity of small Japanese pickups imported by Datsun and Toyota, which first began to "take off" in California. As American automakers were riding the muscle car wave of the late 60's, Japanese automakers were perfecting the compact truck.

When GM became aware of the growing compact truck segment, it was decided that re-badging an existing Japanese compact truck was the most economical way to enter the small truck market. By sourcing their compact truck from a Japanese automaker, GM could shortcut development times and costs. What's more, Japanese automakers were able to produce vehicles at a very low cost compared to US automakers, an obvious benefit. Thus, GM contracted with Isuzu to build and import a small truck, and the Chevy LUV was born.

The Birth of the LUV 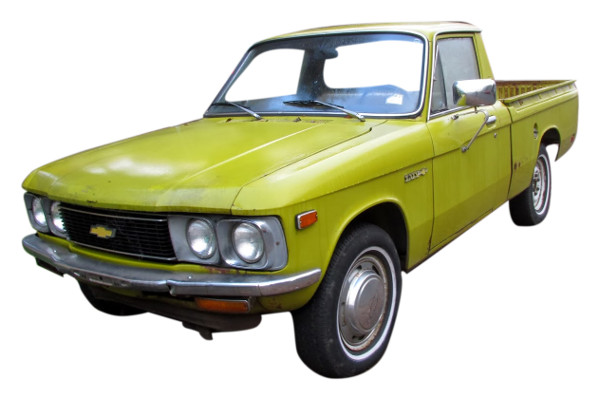 In the late 60's and early 70s, General Motors was the world’s largest corporation and the king of the American auto market. Buick and Oldsmobile were incredibly popular brands known for quality. Pontiac and Chevrolet built affordable performance. Cadillac was a simple of wealth and success. Chevy and GMC trucks were found on farms and construction sites nation wide.

Yet, as history shows, GM's prominence was under attack. Import automakers Honda, Nissan/Datsun, and Toyota were quickly gaining a reputation for quality and value. Younger, entry-level buyers were increasingly open to buying cars from Japan, and there was a great deal of interest among this crowd in small trucks from Datsun and Toyota. While these trucks were not as large or as powerful as the full-size trucks available from Ford, GM, and Dodge, they were fun to drive, tough, and incredibly affordable.

Indeed, a new 1970 Datsun pickup had a sticker price of about $1,875, which was almost 30% less than a full-sized 1970 Chevy C10 fleetside shortbox (which had an MSRP of $2,654, according to NADAGuides.com). While the C10 came with a bigger engine, the Datsun was rated to haul 1,000 lbs of payload, and that was more than enough capacity for a lot of contractors, landscapers, and occasional truck users. What's more, the Datsun's low price was a big hit with younger buyers. As history proved with the Oldsmobile brand, young buyers are key to a brand's long-term survival.

GM (wisely) decided to offer a compact truck to compete against the Datsun pickup (and Toyota Stout/Hilux), and the easiest option was to import a truck built by Japanese automaker Isuzu Motors Ltd. After all, GM held a large stake in Isuzu, which meant Isuzu's gain was also GM's gain as part owner. GM simply bought trucks from Isuzu, imported them to the US, and rebadged them as the LUV (light utility vehicle).

Ford, which also noticed the growth of the compact truck segment, did almost the exact same thing. Ford was a partial owner of Mazda, so they bought Mazda's compact truck, imported it to the US, and badged them as the Ford Courier. Not to be left out, Dodge imported a Mitsubishi pickup in the early 70's too.

The engineering of the Chevy LUV was simple and conventional. It was built with a 102.4” wheelbase and sat on a ladder frame. The suspension was made of unequal a-arms in the front and a solid rear axle with leaf springs in the rear. Narrow 14” wheels were accompanied by bias-ply tires. Stopping power was dependent on a four wheel set of drum brakes. A recirculating ball system controlled the steering of the truck.

Appearance wise, the first year model came with quad headlights and taillights below the tailgate, a design that was intended to emulate styling on larger Chevy trucks. Only one powertrain option was offered in ’72. Powering the LUV was a 1.8L 4-cylinder engine with 2-bbl carb, backed by a 4-speed manual transmission. The powerhouse made a whopping 75 horsepower at 5,000 rpm and 88 lb-ft of torque at 3,000 rpm.

LUV on the Rise

Even during the first year, the Chevy LUV name moved 21,098 trucks. This is no small figure considering the limited release and down-right “ordinariness” of the American mini-truck. In 1973, GM threw a set of squared off headlight bezels at the trucklet and called it a day. That was enough to increase sales to 39,422. 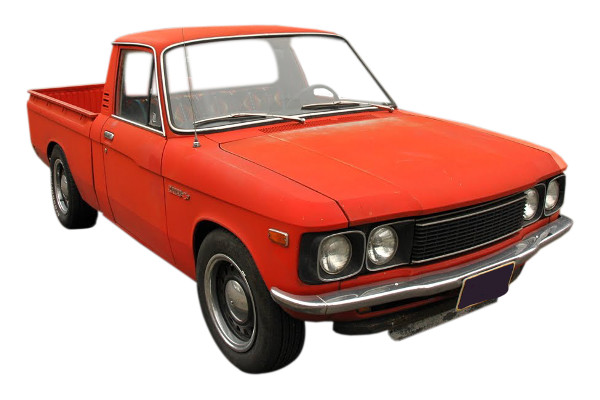 For the 1974 model, the LUV got a slight redesign. The taillights were moved from under the rear bumper to the fenders and were made vertical on each side. A new trim level was added, known as the Mikado package. This upper level package offered drivers a nicer interior with striped upholstery, three spoked steering wheel, and nicer exterior trim than the base model. Sales took a slight drop to 30,328, but popularity was stewing.

In 1975, there were virtually no revisions or additions to the Chevy LUV. For 1976, GM introduced a 3-speed automatic option for the first time in the LUV; this year also got front disc brakes for the first time. For the first time, sales saw a big spike to 46,670, but that was only the beginning of the LUV success.1977 brought a bed-less chassis cab version. GM wanted to attract mini-motor home builders with this option. Engines in 1977 got a 5 horsepower boost from a carburetor tweak to reach a new total of 80 hp. Another rise in sales brought the yearly trucks moved in 1977 to 67,539.

1978 ushered in the first significant changes to the design of the LUV. There were now only 2 headlights instead of 4, it got a new grille, and two bed options instead of one. The standard 6’ bed had the same 102.4” wheelbase as before and the new 7-1/2’ bed sat on a new chassis with a 117.9” wheelbase. Inside was a new instrument panel. Sales soared to 71,145 during the year of 1978. 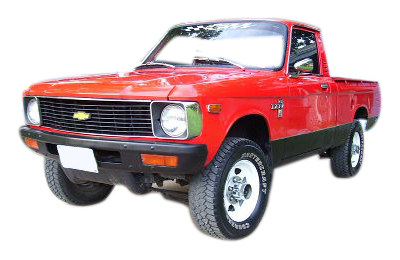 In 1979, four wheel drive was added as an option for the Chevy LUV. Additionally, the GM 4x4 trucklet came close to grabbing Motor Trend’s “Truck of the Year”, claiming the number two spot. Motor Trend noted "One of the heavy components in many four-wheel drives is the transfer case,". Continuing that "The new LUV has the standard four-speed transmission and two-speed transfer case combined in a single unit housed in a die-cast aluminum case. It is very quiet, free of the usual whine of the front-drive gears and shifts easily with the floor-mounted control lever that is clearly marked for four-wheel high, four-wheel low and two-wheel high." The 4x4 version of the LUV used a front independent suspension that was similar to the 2-wheel drive version. This incorporated torsion bars as a springing medium, unlike the Toyota 4x4 truck that was introduced a few months prior.

A Sudden Fall from Grace and a Final Snuff

As quickly as sales shot up, they started to drop before the truck was even a decade old. Without any changes, or complaints to report, the 1980 edition LUV only sold 88,447 units. Sure this is a respectable number, but it’s a pretty big drop from the year prior. In just nine years, the Chevy LUV was on the way down.

It was during this time that both drivers and auto journalists were starting to notice the archaic characteristics of the the GM trucklet. Car and Driver tested out a 2-wheel drive version as a part of a small truck comparison test. It garnered worst ranking on the list, 7th place in a 7 truck competition. The publication noted a lack of truck options, annoying noises at cruising speeds, and a crude ride due to bias-belted tires. They also pointed out that the interior was on the low end compared to other vehicles in the class. 1980 marked the final year of the first generation and American driver’s were not feeling the LUV. 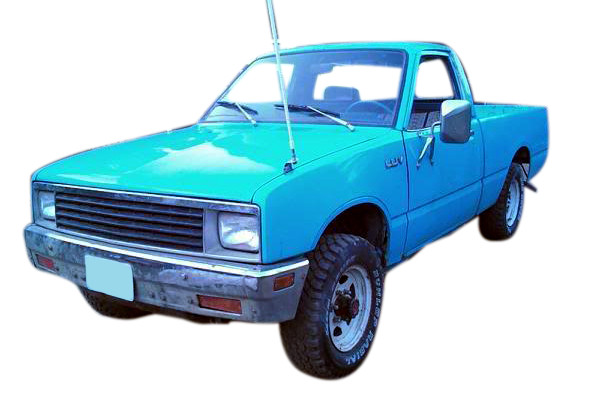 In 1981, the second generation was released, but many think the generational redesign was a mistake. This truck was one of the most generic looking trucks ever made. The boring look was new, but everything else was basically the same. Under the hood was the same 80 horsepower engine, and only engine option still.

The standard wheelbase got 1.9” inches, now stretching to 104.3” but the suspension was still the same setup. By extending the wheelbase slightly, the cab got a little bigger, allowing for more legroom. Rubber replaced plastic front suspension bushings, slightly improving the ride quality. It also got larger front disc brakes and an electronic ignition.

These minimal changes did nothing for sales. The LUV truck just couldn’t keep pace with its import competitors and GM was pulling back on promotion. During the 1981 calendar year, sales plummeted to 61,724. The LUV made it to 1982 with almost no changes and a very small fan base. Only 22,304 LUV trucks were sold and they overstayed their welcome on dealer lots through 1983. Isuzu would continue on with the truck through the 1980s, but without the LUV name. GM replaced the LUV with their own truck, the S-10, and it was even made in the United States.

While the Chevy LUV only had a brief run, it did lay the foundation for American made mini-trucks -- a market that dwindled for a while, but is starting to make a comeback.